skip to main | skip to sidebar

And I'll Look Down And Whisper..."No" 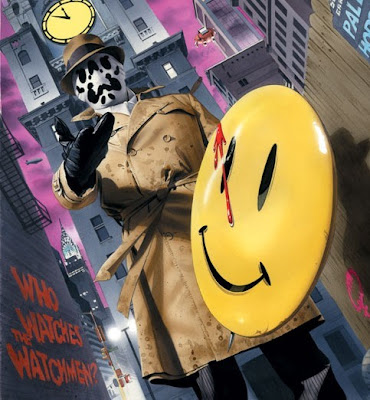 I saw Watchmen in IMAX about 7 hours ago, and have been conducting meta analysis ever since.

Shuffling out of the theater, I gave it at 8.5/10. I enjoyed the movie. The $15 ticket may have been a little much for the IMAX experience, but it was just under three hours of solid entertainment.

Since then, I've been reading reviews and talking to others who have seen the movie. My rating has now become a burden.

Let me say this first - If you are considering seeing Watchmen in theaters, READ THE GRAPHIC NOVEL first. And if you haven't done either, READ NO FURTHER.

I sincerely believe that those who have not read the celebrated comic will not enjoy the movie as it is supposed to be. Though it occasionally kowtows to the bourgeois moviegoer, director Zack Snyder fully intended on making a loving recreation of the story. And it is here where I think that Watchmen fails - it's brilliant in some aspects, yet curiously misguided.

I attribute this to trying to please everyone - the hype for this movie was huge. After the wild success of The Dark Knight, people are looking for the next gritty, somewhat-realistic superhero action flick. Though Watchmen certainly appears to be this movie in previews, it's the antithesis of what the story is at it's heart - a deconstruction of the popularized superhero archetype within an alternate history. Crowds will flock to this movie expecting an action-packed, R-rated Batman movie. They will be disappointed. Conversely, comic nerds wearing smiley-face buttons will flcok to this movie expecting a frame-for-frame recreation with little or no interference. They will also be disappointed.

The genius of Watchmen is that the drama's source is the Cold War - not a devious supervillain with a master plan. Adrian Veidt does play this role in some degree - but the source material's story is set up as a whodunit rather than traditional conflicts we've become so accustomed to in the recent spike in superhero films. The movie seems to confuse his role in the story - the revelation of his involvement near the film's climax is much less dramatic when he is portrayed as a condescending, cold tycoon earlier in the film. He's a symbol of perfection in the graphic novel - nobel and adored by the public - and his identification as a misguided harbinger of destruction is much more surprising in that manner. The comic-within-a-comic, The Black Freighter, mirrors his folly and ultimately explains why empirically what he did was right, he is not free from guilt. This part of the story was (rightfully, given the 2hr, 43 minute running time after cuts) cut from the movie, so the portrayal of the character earlier in the film is even more important. Instead, I feel his characterization was simplified to appeal to mainstream audiences - those not interested in the original work would probably have a problem sitting through 140 minutes without a personification of evil.

Oddly enough, the film seems to increase the violence unnecessarily. Instead of shooting his ill-fated right-hand man, Big Figure has his arms sawed off. Instead of Rorschach burning the kidnapper alive, we are treated to the sight of the masked vigilante repeatedly plunging a butcher's knife into the perpetrator's forehead. I'm no prude - but they clearly were taking opportunities to add "woah, did you see that?" moments. And they don't work as well.

On one hand, some of the scenes are wonderfully translated to film - the riot during the police strike, Rorschach's prison confrontations, and the death of the Comedian are all more entertaining when they aren't merely drawings. Seeing these scenes in live action is something the source material cannot offer itself. But there are other sequences that were clearly an attempt to keep the audience engaged with action - the Nite Owl and Silk Specter's apartment rescue, for example seemed cheesy and unnecessary.

On that level, some characters benefited from being brought to life, while others are frustratingly portrayed. The good news is that the movie is, for the most part, extremely well-cast. Jeffrey Dean Morgan blew me away as the Comedian - he made liking a despicable character much easier than it was on paper. Jackie Earle Hayley was meant to be Rorshach. Patrick Wilson makes an endearing, yet somehow bad-ass, Nite Owl. Billy Crudup does a commendable job Doctor Manhattan, a character I have struggled to sympathize with (and still do).

Malin Akerman physically represents Laurie Jupiter well. She's incredibly gorgeous in the movie and looks like the character should. But she doesn't portray a sympathetic character - whether this is acting or the direction, I'm not sure. The character's dramatic moments aren't laughably bad in the movie, but are strangely more moving within the panel of a comic. It's not enough to jeopordize the tone of the film, but those of us who have read Watchmen know something's not quite right.

Matthew Goode as Adrian Veidt is the film's biggest mistake. He wasn't right for the part - which makes sense, considering that they had difficulty casting Veidt. But to be fair to Goode, as stated above, the film's script does a poor job fleshing out the character.

The movie's soundtrack has the most dramatic highs and lows. The credits sequence catching up the audience with the path of this alternate history set to "The Times They Are A-Changin'" is incredibly well done. The Comedian's riot-breaking set to "Boogeyman" is downright awesome. "The Sounds of Silence" provides an appropriate atmosphere to the Comedian's funeral. But at the same time, you have the bizarre inclusion of 99 Luft Balloons, and an incredibly lame Bob Dylan cover by My Chemical Romance for the closing credits. Wikipedia mentions that MCR are huge fans of the graphic novel. Guess what, so am I, and you don't have to suffer through my rendition of anything while filing out of the theater.

Of course, all of this is secondary to how the plot is handled. Watchmen is very much a series of vignettes leading up to a climactic (if puzzling) ending. For the most part, (read: with the exception of Veidt) we are familiarized with the main characters as the plot is slowly advanced. There are some tweaks to simplify some of the back stories, but they are still the same people. The only major difference is the blame of attacks on earth not from aliens, but Doctor Manhattan. I found the best way to describe my stand on this is to respond to IGN's:

Dropping the squid isn't the problem; it's that the logic of the new finale that Snyder and the writers came up with doesn't hold up under the least bit of scrutiny. On the surface level, making Doctor Manhattan the scapegoat sounds like a great alternative... until you realize that there is simply no way the countries of the world are going to set aside their differences and join hands in peace after America's ultimate super-weapon -- which he has been touted as for the whole film -- is to blame for the deaths of millions. The U.S. and U.S.S.R. are at the very brink of war, remember. Complete and total nuclear annihilation is at hand, with the rest of the world wondering if America might use the blue-skinned ace it has up its sleeve (as it did to win in Vietnam). So given that state of anxiety, if Doctor Manhattan took out the world's major cities, why would any foreign nation now want to work with America for a better future? If there was ever a time when they'd want to wipe us off the map, it'd be after such an attack. As silly as the squid was, it worked because it was an external threat that united these disparate human factions in a common cause against a more powerful outside force. Imagine if the world knew that the squid was an American creation, there would have been no Utopian outcome.

I am of the opinion that the squid was the worst part of the graphic novel. It seemed tacked on and flimsy. From my perspective, Alan Moore thought it would be cool to throw in some bullshit about a psychic's brain and genetic engineering to wow the reader. So the blame on Dr. Manhattan, while it was dumbed down, made a little more sense to me. I feel the attack on American cities would shake any suspicion that Manhattan was working for the U.S., and that he was a much more credible threat than random-ass giant squid aliens popping up in major cities. Manhattan can be considered external because he is NOT HUMAN, and I'm sure Earth's general population could buy that if banded together, they would stand a chance against the indestructible man. It was one of the few choices that made the movie more blockbuster-friendly that I actually agreed with.

I like it because I love the source material. Because deep down, no matter how pissed off some of the fanboys got when anything was changed, when a line was delivered the wrong way, or when they had to see the film version of Adrian Veidt, they wanted this movie. They wanted to see some of their favorite moments jump off the page, and feel the same way they did the first time they read Watchmen. And in some parts of the movie, they did.

And that's why I've concluded that the movie works best as a companion piece - you take the good with the bad, because you know the bad doesn't cheapen the graphic novel. It just fails to live up to expectations. And for those of us who were disappointed, we likely have the source material sitting on our bookshelf, unchanged.

In Snyder's recreation of the book, he tries to please too many people. Moviegoers uninitiated to the story will find it slowly paced and sometimes confusing. Uncompromising diehards will lose hair when Archie's flamethrower goes off at the point of climax for comedic effect. And ultimately, the movie will probably fizzle after a strong showing in the first weekend.

But that doesn't mean it's a bad movie. I loved some segments, and questioned others, and ultimately left with a good feeling. I could be giving it points because the book was so good in the first place, but that really just speaks to how remarkable the story is. I enjoyed the movie because I was prudent enough to appreciate the source material, but not obsessed with it to the point of hating any tweak.

I truly believe allowing myself to enjoy the book first was key. All the uninitiated will look up and ask "should I see this Watchmen? I haven't heard much about it." And I'll Look Down And Whisper "No."
Posted by Mark at 10:02 PM

Wow your post on Watchmen is extremely interesting! You definitely have a gift. It's a little on the short side though. You're going to need to be more thorough if you want to be a successful writer.

Mark
I have yet to be great at any one thing, so the plan is to be mediocre at a lot of things.